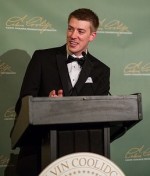 Denhart previously served as a research fellow of the George W. Bush Institute, based in New York City, and as administrative director of the Center for College Affordability and Productivity, based in Washington, DC. He has studied immigration policy extensively and is the author of “America’s Advantage: A Handbook on Immigration and Economic Growth,” published in 2015 by the Bush Institute and the U.S. Hispanic Chamber of Commerce. In addition, Denhart has written and spoken widely on the topics of higher education, labor, and tax policy. He has authored numerous policy studies and has contributed articles to national publications such as The Wall Street Journal, Forbes.com, CNN Opinion, Bloomberg View, Huffington Post, and the New York Post. He has appeared in broadcast outlets such as ABC News and C-SPAN. Denhart played a critical role in developing the index of “America’s Best Colleges,” published annually by Forbes Magazine.