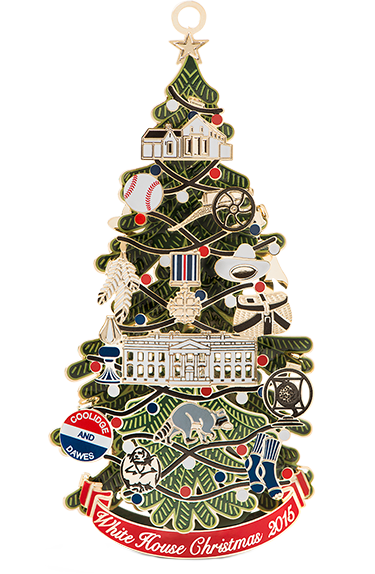 The 2015 White House Christmas ornament honors the administration of Calvin Coolidge, who served as the thirtieth president of the United States from 1923 to 1929. A depiction of the first National Christmas tree crafted from shiny brass plated with nickel and 24k gold is illuminated from within and hung with ornaments representing the events of Coolidge’s unique life and presidency.

The 14 colorful ornaments represented on the front of the tree are beautifully silhouetted in 24k gold on the back of the design. The windows of the Coolidge White House glow from within with the north and south facades featured on front and back of the ornament respectively.

The sweeping banner anchoring the tree reads “White House Christmas 2015” on the front and “1923 Calvin Coolidge 1929” on the back. Tucked discretely on the back of the ornament is the switch for the new LED light feature included in this year’s design.

There are no reviews yet.